Last week my co-worker, Loren, brought me a colorful array of fresh veggies from his garden including some zucchini, cucumber, cherry tomatoes, and small yellow tomatoes in the shape of a pear (fittingly named yellow pear tomatoes). I usually don’t eat tomatoes unless they’re in a dish or on a sandwich but the yellow pear tomatoes were so good and sweet I could eat them alone!

I started searching for recipes to use the rest of my goods and found a grilled stuffed Portobello mushroom recipe from myrecipes.com. The recipe just so happened to call for tomatoes so I put my newly acquired cherry tomatoes to good use: 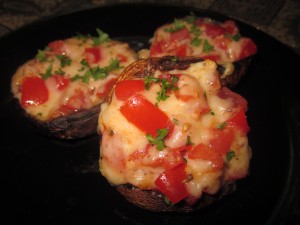 These mushrooms made for a great appetizer alongside steak. The light brush of olive oil, lemon juice, and soy sauce kept the mushrooms from sticking to the grill and made them nice and juicy. The recipe I found called for 4 – 5 inch Portobello mushrooms but I used  6 – 3 inch shrooms instead.

To print this recipe and read reviews, click here.