Snorkeling Molokini | The Not So Sweet Taste of Saltwater

You will never forget your first taste of salty ocean water. It’s a bit of a shock. Or it was for me anyway. And that’s coming from someone who swam in salt water pools at state swim meets growing up. Someone whose mother made them gargle salt water when they had a sore throat. Maybe I had just forgotten over the years but that first taste of salty water on our early morning snorkeling trip to Molokini woke me right up.

I was a bit on the slower side that morning. We had to wake up early (like 5:30 a.m. early) and I’m not much of a morning person. And if you think getting up before 6 a.m. on vacation is bad…try getting up before 6 a.m. on vacation when it’s raining.  Thankfully the rain was not the kind of rain we’re used to in Portland. It was lighter and warmer.  But there was still a part of me saying to myself “what were we thinking…”

On our way to Turtle Town

We boarded Kai Kanani’s massive 65′ vessel and made our way out to Molokini – a famed dive spot that I had read about in every magazine, book, and website about Maui. Molokini is a partially sunken volcanic crater about 2 miles off the coast of Maui. It is shaped like a crescent which provides an excellent habitat to over 250 different species of fish. As we got closer to crater, the water seemed to change from a deep blue sapphire to clear turquoise. It wasn’t until I was staring at a school of bluefins swimming along the bottom of the ocean that I finally believed that Molokini has up to 150 foot visibility at times. It was amazing.

After about 45 minutes of snorkeling the crystal clear waters of  Molokini, we boarded and headed to Turtle Town. We were told to follow one of the guides if we wanted a better chance of spotting a green sea turtle. Within minutes of arriving at said Turtle Town, we saw a small turtle head pop out of the water in the middle of our group. The water in Turtle Town seemed a bit murky after snorkeling Molokini and with the large crowd we had a hard time seeing the turtle’s large body. We continued to explore the extensive reefs in search of a giant turtle but before we knew it we were being called back to board.

My boyfriend and I were almost back to the boat when members of the crew started yelling at us to turn around. We looked behind us and a huge green sea turtle was swimming past the right side of our bodies. It’s algae covered shell must have measured at least 4 feet in length. For such an enormous creature it was amazing how graceful it swept by us. It reminded me of watching the sea lions glide up and down their cove at the Oregon Zoo. Such a cool experience. If you find yourself in Maui, don’t leave without looking up Captain Cary at Kai Kanani. The entire crew was fun and extremely knowledgeable and the experience was unbeatable!

#1. Go with the early morning Express Tour even if you’re not a morning person. We were literally the only boat at Molokini so we had the entire area to ourselves.

#2. Keep an eye out for other marine life on the way out to Molokini. We were there in April towards the end of whale season but we were able to spot a whale and her calf.

#3. Wear shoes you can easily identify. Kai Kanani asks that you take off your shoes before boarding their beautiful catamaran. All shoes are placed into a large sack and emptied onto the beach at the end of the tour. I wore cheap, black Old Navy sandals (along with several other people) so they were difficult to pick out. I wear a size 6 sandal so mine could easily be mistaken for small children’s shoes. Who knows if I actually left with the shoes I wore in. Oh well!

#4. Don’t be ashamed to grab a boogie board if you need it. The waves at Molokini were choppy so it was nice to have something to grab onto.

#5. Enjoy every minute! Aside from the beautiful beachfront union of our two good friends Ben & Jackie, this was one of the funnest experiences we had in Maui! 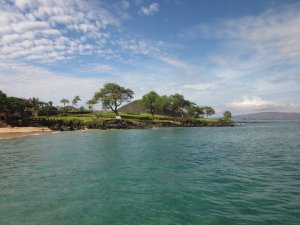